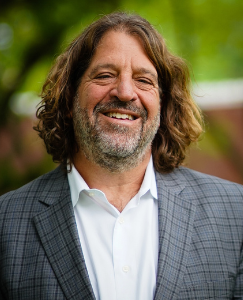 Rabbi Randy Fleisher was born in the Chicago area and attended the University of Wisconsin for his undergraduate studies. In the years before he entered rabbinical school, Rabbi Fleisher worked for a citizen's action group in Washington, D.C., taught outdoor education in Connecticut and Massachusetts, and was the Associate Director of Camp Thunderbird in the north woods in Minnesota. At Hebrew Union College in New York City, Rabbi Fleisher directed the seminary's meal program for the homeless and for two years served as the student rabbi in Hickory, North Carolina.

Ordained in 2000, Rabbi Fleisher came to St. Louis to be the Director of Camp Sabra, a Jewish camp in the Missouri Ozarks. When he was named to be the Assistant Rabbi at Central Reform Congregation two years later, Randy officially left the organized camping profession, but has since incorporated a love and reverence for the natural world into his rabbinate. At CRC, Rabbi Randy takes on a variety of roles in that diverse, social justice minded, and spiritually vibrant urban congregation. Named Associate Rabbi in 2004, Rabbi Fleisher works alongside one of his rabbinic mentors, CRC's founding rabbi, Susan Talve, and he is known to accompany his services with a guitar slung over his shoulders. "Rabbi Randy" as he is commonly known, is proud to officiate at same-gender and interfaith weddings and he also often co-officiates ceremonies with clergy of traditions other than Judaism. Rabbi Randy helped bring a homeless shelter program, Room at the Inn, to CRC, in which up to ten temporarily homeless guests spend the night at the synagogue. Randy also works extensively in the area of Jewish racial diversity, helping organize a group supporting for Jews of Color within the congregation, and forging an alliance with a local group of 'Black Hebrews,' the African Hebrew Israelite community. Randy also loves teaching in CRC's Hebrew School, and working with teens toward a joyous and meaningful Beit Mitzvah experience. Randy has a keen interest in blending contemporary music (rock, folk, reggae, soul genres in particular) into Shabbat services.

Rabbi Randy is also quite involved in the greater community, most notably with the Central West End Holy Ground Collaborative, a neighborhood-based interfaith and multi-racial grassroots organization working for urban justice and renewal. With Holy Ground, he was a founder of a no-interest, micro-lending program that helps those in the Central West End (south and north of Delmar) who have fallen on hard times. Randy is a past chair of the Jewish Environmental Initiative and served two terms as Vice-President of Cultural Leadership, an organization bringing together teenagers of different racial and cultural backgrounds. He has served on the Boards of Directors of many organizations, including Habitat for Humanity, M-SLICE (Metro St. Louis Coalition for Inclusion and Equity), the Jewish Fund for Human Needs, the St. Louis chapter of the Urban League, Lift for Life Charter School, and Doorways (housing for AIDS patients). For ten years, with Rabbi James Stone Goodman, Rabbi Randy organized the annual Heschel/King event, honoring St. Louis based Jewish and African-American leaders who have worked together for justice and harmony. In 2005, Rabbi Randy was recognized by the Coro Leadership Center with an 'Emerging Leader' award, and in 2012 by St. Louis University for "Upholding the Life and Legacy of Martin Luther King, Jr." In the fall of 2019, the wonderful CRC community held a celebration to honor Rabbi Randy's "chai" (18th) anniversary as a CRC rabbi. In 2020, Rabbi Randy was honored to have been elected to serve on the board of a national organization called The Shalom Center. The Shalom Center was founded and is directed by one of Rabbi Randy’s rabbinic role models, Rabbi Arthur Waskow, and it brings Jewish Renewal energy and creativity to efforts to achieve social justice, peace, and environmental sustainability.

Rabbi Fleisher and his wife Amy live in University City, and have two adult children (Zoey Sky and Gabriel Shine). 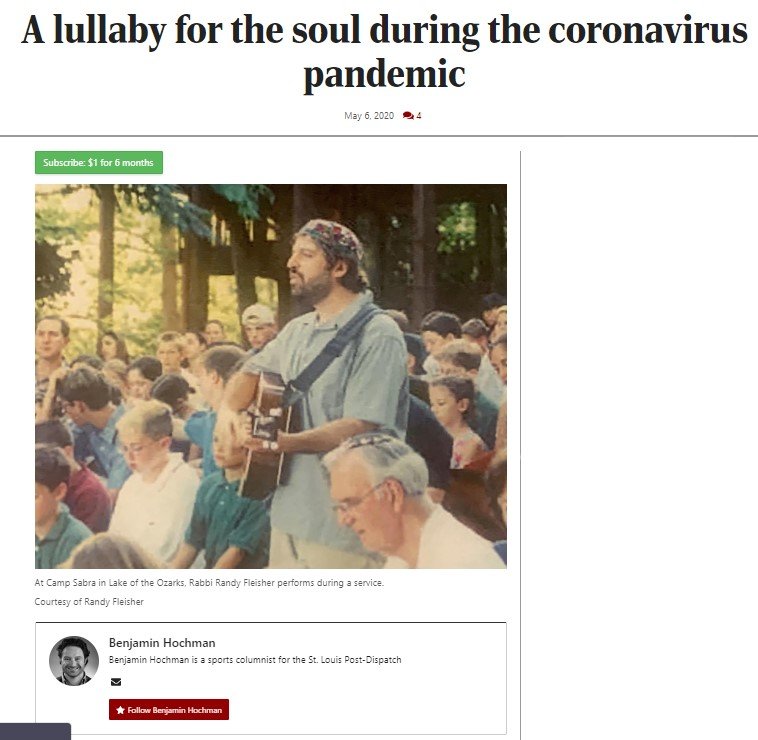 Click here to read the St. Louis Post-Dispatch article about Rabbi Randy written by Benjamin Hochman about his unique "Hashkiveinu."

Deeply committed to Jewish values, spirituality, practices and wisdom, Rabbi Randy is also very open to the gifts and blessings of other religious and secular paths to meaning, justice, compassion, and purpose. Randy gladly officiates interfaith weddings that incorporate rituals from the traditions of both partners, and also often co-officiates weddings and other life-cycle ceremonies with non-Jewish clergy and celebrants. Randy is involved with a variety of multi-tradition groups and dialogues. He was a founder of the neighborhood based Holy Ground Collaborative in which a religiously and racially diverse group of congregations, meet, plan interfaith services, and engage in social justice and volunteer work.

One of the pillars of CRC is tikkun olam, and Rabbi Randy has taken to repairing the world through social justice. Long before Randy was ordained as a rabbi, he was an activist. At CRC, Rabbi Randy has participated and spoken at many demonstrations for social/racial/economic justice. During the Ferguson uprising following the killing of Michael Brown, Randy was a regular presence at the various protests and events, working with an array of clergy to be a ‘sympathetic peacekeeper.’

The Jewish Renewal movement, exemplified by teachers such as Zalman Schachter-Shalomi, Arthur Waskow, Shefa Gold, Rami Shapiro and others, has been a major influence on Rabbi Randy’s rabbinate. In that spirit, Randy works to incorporate meditation, movement, prayer-in dialogue, repetitive chanting, creative uses of English, and expansive metaphors for God/godliness into the services he leads.

Rabbi Randy once wrote a column titled "From the Left Wing for the Jewish Federation in which he hoped to articulate and demonstrate some of the specific ways to live out the boundary-pushing, non-judgmental, greatly inclusive and decidedly un-traditional philosophy of Judaism that he had long preferred and espoused. Eaely in the pandemic, Rabbi Randy gathered participants for a virtual lunch and learn in which he read one of the essays and made time for feedback and discussion. Archived videos of these "From the Left Wing" events can be found here.

Rabbi Randy believes that “mash-up” music at Shabbat services can be a powerful bridge between religious and secular; Jewish and non-Jewish; ancient and modern; Hebrew and English. He is fond of blending secular musicians with a spiritual side from the worlds of rock, folk, reggae and soul music such as U2, Bob Dylan, Bob Marley, Van Morrison and others into Jewish music. Randy developed an “aural Torah” class on this very topic. His version of the Hashkiveinu prayer in this category was featured in the St. Louis Post-Dispatch (see left).

From its inception, CRC has made connections, alliances and friendships with communities of color, Black churches and secular racial justice organizations in the City of St. Louis. When Rabbi Randy began his rabbinate at CRC, the congregation added a focus on outreach to Jews of Color and making sure CRC was truly a welcoming and meaningful space for African-American Jews. Rabbi Randy helped create the Jews of Color Chavurah, developed ties to the local branch of the African Hebrew Israelite community, and is a founder and organizer of the annual Jewish Racial Diversity seder.

Rabbi Randy comes from an extensive background in organized camping and outdoor education and works to incorporate all of that into CRC’s programming. Randy teaches that Judaism was originally totally nature-based; the seasons, moon-cycles and appreciation of earth itself are still important components of Jewish spirituality. Randy leads a CRC retreat each fall at Camp Wyman, he has organized CRC Men’s retreats in the woods, and he leads special outdoor services, namely bonfires on Lag B’ Omer and visits to the Mississippi/Missouri Rivers confluence to observe Hoshanah Rabbah. Randy often brings the children, youth and teens of CRC outside for outdoor learning, spirituality, and fun. Recently, Randy has been advising a group of CRC congregants who are involved in projects involving the urban green spaces on our synagogue property. As part of that effort, CRC installed a walking meditation labyrinth, a long dream of Rabbi Randy’s. 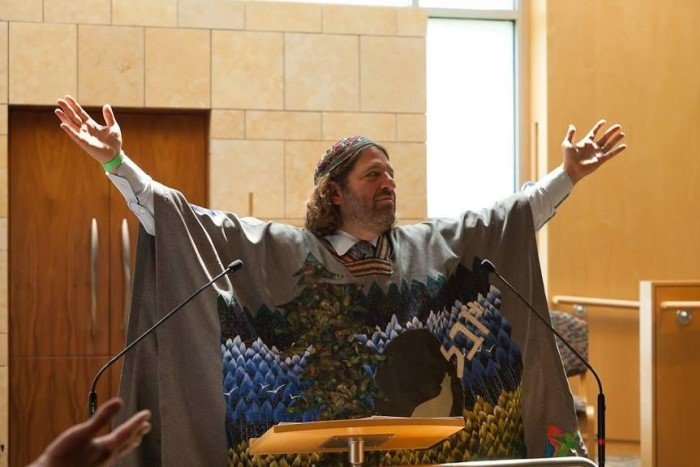